To see this, we begin with the doctrine of creation. As J. C. Polkinghorne explains, “If the world is the creation of the rational God, and if we are creatures made in the divine image, then it is entirely understandable that there is an order in the universe that is deeply accessible to our minds.” This explains why so many pioneers in modern science and mathematics, such as Newton, understood their faith to be the great motivation for the work they were doing. As C.S. Lewis observed, they expected law in nature because they believed in a Law Giver. Hence, a number of historians of science trace the historical foundation for modern science to faith in a Creator.

To make progress then on questions regarding the nature and value of mathematics, it makes sense to review the creation account. Genesis opens with God creating the world, giving it structure, and moving it from a state of confusion to one of order. After humanity--both male and female--are made in the image of God, they are then given a mandate to participate in creation: to extend creation (“be fruitful and multiply”) and rule over the creation (“have dominion”). God creates animals, Adam names them; God creates a garden, the first couple are to cultivate it. Thus we find a picture of human and divine cooperation in caring for and extending creation.

In our brief survey of the philosophy of mathematics above, we noted that there is good reason to think of mathematics both as discovery and as creation, although either account faces challenges on its own. Genesis’ image of humanity being created to care for a garden serves as a rich model to resolve this tension. A garden is both discovered and created. The plants present existed in nature already, but the way in which they are brought together, arranged, and cultivated reflects the human gardeners.

A similar story can be told of mathematics: we begin with ideas that appear very naturally within God’s creation, then, as image-bearers, we interact with creation by rationally extending these ideas. Having been made in the image of the One who made the cosmos, we quite expect some form of correspondence between the mathematical notions we develop and the structure we discover in the natural world, but we also expect our mathematics to reflect the people and societies that developed them. Mathematics then resists being classified as either a natural science or a creative art--it is both. 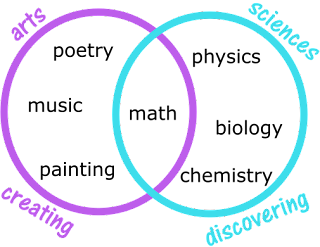 Some have sought to make a distinction between pure and applied mathematics, and while such a distinction of terms proves useful at times, it is rather difficult to draw that dividing line. A mathematician may pursue a line of study simply to satisfy her mathematical curiosity, but often the notions she develops are later realized to be precisely the tools needed to describe some natural phenomena. The truth that a mathematician seeks simply for its beauty or elegance is seen to fill and describe creation, bearing witness to creation’s good Creator.

One may ask--indeed many have--must mathematics find an application to the natural world to be considered valuable? Here again Genesis’ garden is helpful. Bearing fruit was not the only purpose of its trees--they’re also recorded as having been beautiful (Genesis 2:9). Beauty was valued in God’s original creation independent of any utilitarian purpose. Humanity was designed to do more than just survive; our gardens grow both fruit to be eaten and flowers to be appreciated. Similarly, the value of mathematics can be found in both its usefulness and its beauty.


Next: Mathematics and Eternity
Posted by Anthony at 11:29 PM

As a math grad student, I do a lot of math. Often I wonder how that relates to my love for God and Christian faith. Here I'm exploring that intersection.
I also have a page for my academic activities.